This post is part of an ongoing monthly series that  focuses on our current efforts in the Museum’s Science Bulletins team to create and test prototypes of Hall-based digital interactions using AR and VR using our scientists’ digital data, and to share some of the lessons we learn along the way.

If you’re like me, you knew the Curiosity rover is on Mars, sending back some amazing photos. But I had no idea that many of those photos were being used to create topographical maps at resolutions previous available only in a scientist’s dreams. In June we ported that data into a Microsoft Hololens to explore how our visitors might feel walking across the red planet… while playing golf.

Mars, however, was not where this project began. Originally, we were focused on the moon. We have a small section in our Hall of the Universe dedicated to our little Luna, with signage, a metal globe, and a floor scale that displays your weight on the moon.

That scale became our inspiration. Think about it a moment  – the design of the experience is so elegant. You stand on it, because you already know what to do with a scale, and all it says is “Your weight on the moon” while a red digital number appears on the display. And that’s it. It’s like an intellectual pile of lego blocks, that  challenge you to put it all together to make sense of your experience, which most people do standing up straight, head down reading the display. Hmm? The number I see on the display is NOT my weight. What’s going on? Comparing the two – what I know with what I see – I realize I weigh less on the moon. That might make me wonder why. Maybe I know that gravity is less on the moon, and maybe I realize that is because the moon has less mass than the earth. Or maybe I don’t. But in an instant the scale tossed me a challenge and I can then choose whether or not to accept it.

It can be quite wonderful watching visitors go through all of the above, again and again, in just a few seconds, and note how they often bring the people around them into the experience.

So that’s where we started: What if you took the elegance of the scale, and expanded it through digital tools, allowing the visitor to both see the moon all around them and then explore how gravity differs on the moon (perhaps through tossing a ball). Working with Nathan Leigh, a Postdoctoral Fellow in the Museum’s Department of Astrophysics, we explored a number of game options. A tossed ball? Basketball? Throwing a ball into a bucket? It turned out a nice arc to the ball helps to illustrate some of the gravitational differences, and that led us to golf… Mooniature Golf!

We had presumed we had access to good lunar surface data – and we do – but positioning at the human-scale was a level of resolution we just couldn’t acquire. Luckily, the lunar scale is only one of a number of scales sending our visitors around the universe.

And that’s when we learned about our interplanetary photographer, Curiosity, and considered our Mars scale. That’s how Mooniature Golf turned into Martian Golf.

We wanted to hue close to the existing Hall experience – you look at the scale and you’re invited to make a comparison between what you already know and what it tells you. After a number of over-elaborate concepts, we came up with the idea for a single golf hole, on the Martian surface, next to Curiosity itself.

For the user interface, we went with the Hololens clicker. We wanted something physical, that could be swung like a golf club, with a simple user interface. So one click and hold to start the swing, and then let go to end the swing, sending the ball flying. To bring home the educational objective, the ball now flew in two arcs – a smaller blue arc showing how the golf ball would fly under earth gravity, the higher green arc showing how it would fly on Mars. If the visitor fails to get a hole-in-one, then Nathan, who has been providing narration throughout, provides feedback on whether the next swing should be harder or softer.

Ah, but when the ball lands in the hole, with a satisfying (albeit unscientific) clunk, the Curiosity rover is activated, rolling back and forth, as if joining you in a victory dance.

We then added one final, non-digital element. After finishing the hole, Nathan instructs the player to return to the facilitator and get a Score Card. The Score Card, like the sheet used in miniature golf to record your swings, is actually for recording your weight on the scale, along with two questions that extend this theme about weight and mass:

Right, and this uses not just the Mars scale but also the ones around the Hall of the Universe, which offers scale for the moon, Saturn, the Sun and a red giant star. Since the focus was now no longer on just Mars, we changed the name to Galactic Golf.

We wanted to learn if the facilitated digital experience could send visitors on a longer, self-directed, analog experience (which looked like touring the scales and filling out the sheet). And since we also used the sheet to evaluate their understanding of the key learning objectives, we provided some motivation to get them to turn them back in to the facilitator: a 3D print of the Gale Crater, where the Curiosity Rover first landed.

After observing and interviewing around 80 people, here are some of the key lessons we took away from this round of prototyping: 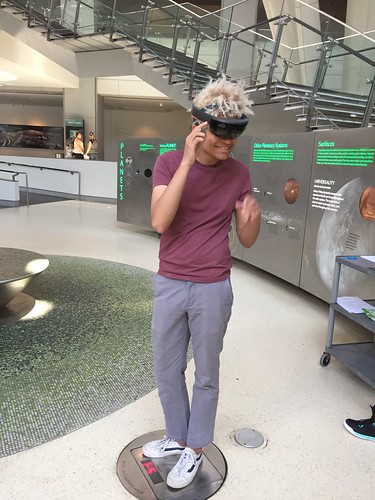